Within this project, funded by a VENI grant by the Dutch Technology Foundation STW, several systems to screen for the combined effect of multiple mechanical on cells have been developed. The systems are transparent and designed on the footprint of standard well plates, which makes them compatible with automated imaging modalities such as plate readers.

The figure above shows a schematic representation of the devices developed in this project. A thin membrane is positioned over trenches containing pillars. By decreasing the pressure underneath the membrane, the membrane is pulled into the trench, resulting in straining of the cells growing on top of the membrane. At the same time, the cells experience shear stress from fluid flowing through channels on top of the membrane. In this specific design, elipsoid trenches containing a circular pillar will result in anisotropic strains experienced by the cells. The degree of anisotropy is varied by varying the shape of the trench. The actual device results in 25 different stimulations that can be screened in a single experiment, with each condition beeing performed in quadruplicate. 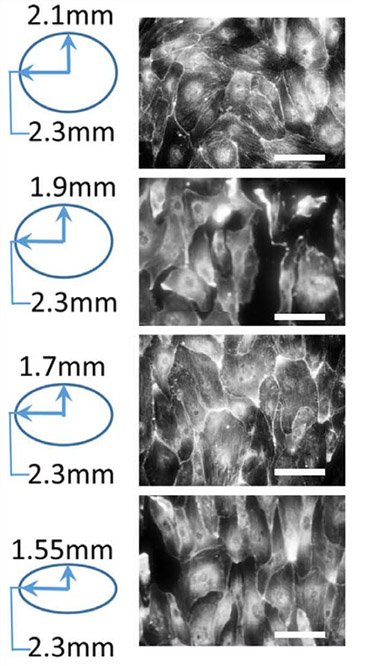 The figure here on the left shows how the system can be used to determine how endothelial cells respond to increasingly anisotropic strains. Where the cells at the top sample are more rounded and not preferentially aligned due to the elipse shape that is close to a circle, the cells are more and more elongated and preferentially aligned perpendicular to the major strain direction when anisotropy increases. Since the systems also includes a variation in the angle of the major strain direction with respect to the direction of the fluid flow, the system will also show whether the cells are more inclined to align based on surface strains or fluid flow shear stresses when these signals are conflicting for cell alignment when offered individualy.

Publications generated within this project